John Sacks is a well known advisor in the European office furniture industry and chairman of the economic committee of the FEMB. John visited the Stockholm Furniture Fair 2017 and below you will find his review of this highly appreciated event.

Stockholm in February is a shock to the system. Snow and ice on the ground. Rivers and canals frozen over. Night time temperatures down to minus 8c. Bitterly cold, but brilliantly sunny.
After a day or so when you have acclimatised, you notice other things. How the air you’re breathing is so fresh and bracing. The spotlessly clean environment. The friendly and charming people, 99% of whom seem to speak perfect English. How the transport systems all work so efficiently. The delicious, if outrageously expensive, food, and especially drink.

The Stockholm Furniture & Lighting Fair is a consummate event. Contained within three halls, one very large and two smaller, together with a number of linked displays, it is compact, compared with Orgatec or, especially, Milan. However, for the serious as opposed to the casual visitor, the overwhelmingly high proportion of quality exhibitors and products means that covering the show takes a long time. It feels as if every stand has something special to say and it’s almost a relief when you chance upon something which is outside your own zone of interest and which, consequently, you can safely ignore. The originality of products and the way they are displayed is exceptional and it’s a delight to see how almost every company has raised its game knowing how tough the competition is that it faces.

One characteristic of the furniture industry in Nordic countries is the high proportion of very old companies, some of which date back to the 18th century, and which are still owned and managed by members of the original founding families. This continuity undoubtedly contributes to a sense of obligation to past generations to maintain the highest of quality standards, as if to avoid harming the accumulated heritage.

Many of the exhibitor companies are very small, with just a handful of employees. The few that don’t manufacture all their own products invariably source the rest from similarly small manufacturers in their immediate vicinity. The cost of exhibiting here is very high, just as with most things in Sweden. It’s difficult to understand how such small companies can afford to take such large, impressive stands at the show.
Apart from the “home” companies, Italian manufacturers were well represented, together with a smattering from other parts of Europe. There were very few from further afield.

It was frankly difficult to find anything to carp at. Access from the city centre by the fast train service is easy. Exhibitors are generally conveniently arranged according to their product sector, signage is clear and informative and catering facilities are abundant, varied, original in nature and imaginative. How often do you find a large sushi bar at a furniture show, outside Japan? There are even plenty of washrooms well spread around the halls which is often a failing of other shows.

One innovative feature was a large, full-scale pop-up restaurant – Sulla Bocca Di Tutti – which was both a very classy eatery and a design exhibit in its own right, with a menu created by celebrity chef Isabella Morrone combining Swedish and Italian cuisine.

After the first day, attendance built up quickly, peaking on the Thursday which was very busy. It seemed that even the quality of visitor was high with what seemed to be many very serious-looking attendees from all over the world, most of whom looked as though they were from a design or architectural discipline. Noise levels were low, unlike many shows, despite the high attendance and a plethora of babies in pushchairs. This is Sweden, after all!
The fair is somewhat less of a networking event than other shows; more an opportunity to experience cutting edge design from hundreds of often very small, but highly innovative makers, a few displaying products of a quality that took the breath away.

At first sight, it wasn’t easy to spot trends because exhibitors at this fair strive for originality. However, with most of the exhibitors from the Nordic countries, it is not surprising that natural materials – especially timber and wool-based textiles – abound. Wood products were invariably beautifully finished and highly tactile, and there was considerable emphasis on original fabric designs featuring the earthy colours of nature.
There were many stands where black and white were the prominent colours, often featuring black-stained ash furniture, and others where all upholstery was in shades of grey so as not to distract the eye from the form of the seating or breakout furniture being presented.

The focus of the office furniture companies was away from workstations, although there were some sit stand products on show. Much of their emphasis was on upholstered products, including enclosures of all shapes and sizes, and tables with related seating. Shell chairs abounded. Acoustic
products were well represented with an emphasis on portability and lightness of appearance. Telephone enclosures were everywhere.

Jonas Ihreborn from Värnamo in the south of Sweden were a good example of the country’s furniture makers – a 3rd generation family business with 14 employees who export 30% of their output. They showed one of the black ash veneered tables which were seen around the show, Piano.

A young cooperative of five owners, Wobedo, who work together in Lund, also in the South of Sweden where most of the furniture manufacturers are to be found, showed their novel, foldable, lightweight portable screens. They can create instant privacy in a variety of environments, including education and come with a wall-mounted hook so the screens can be easily stored.

The Danish industry giant, Fritz Hansen, had a large stand showing some of their classic products and a new upholstered chair, via 57, designed by Bjarke Ingels and with a shape inspired by the E57th St skyscraper he created in New York.

A small company from Knislinge in the south of Sweden, Skipper, with only thirteen employees, presented a new modular line of reception seating, Circles, designed by Carsten Buhl and reflecting the pervasive black and white theme.

Danish maker, Magnus Olesen continued the wood theme with their well-crafted timber-framed Slender conference table with a lino top, designed by Antonio Scaffidi and the Freya chair from Says Who.

Horreds, one of the larger companies with fifty employees, and located in the village of the same name not far from Gothenburg, followed the black and white theme with sit stand tables and also showed a new range of Yoko stools. 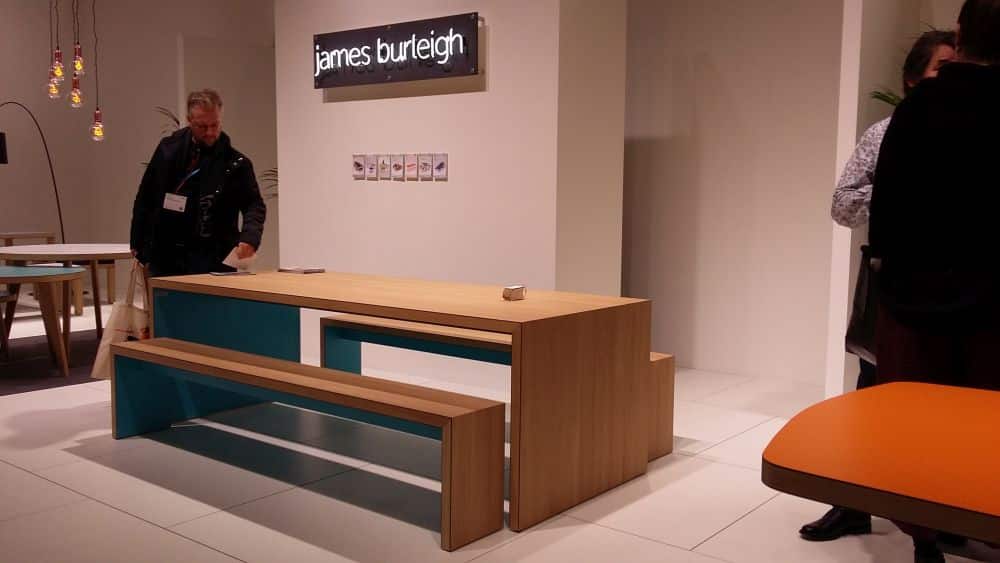 The eponymous James Burleigh from London, a favourite with the architectural community, showed a range of wood and laminate tables while another British company, OCee Design, which recently acquired the Danish organisation, Four Design, presented a wide range of products, a result of that long- standing collaboration 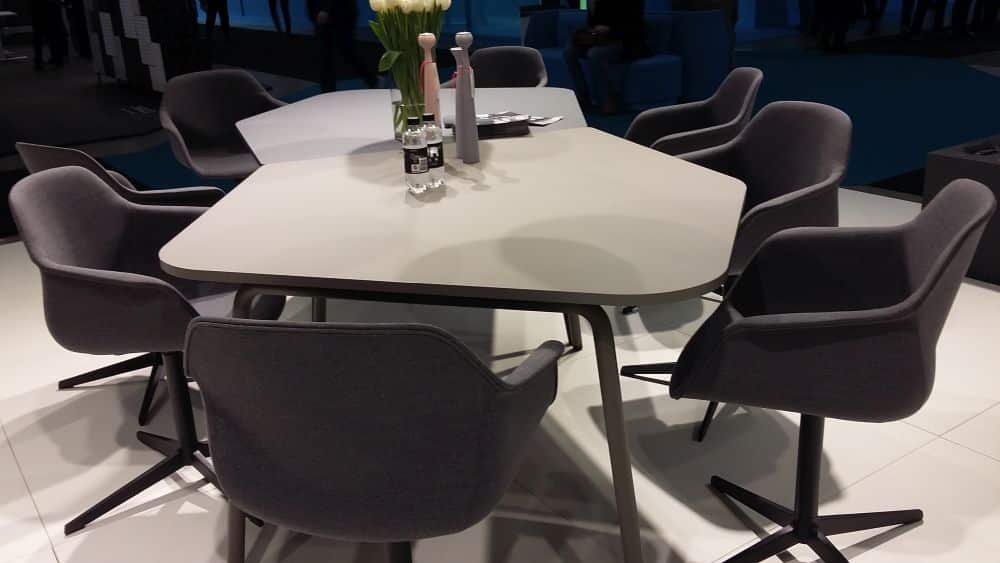 Zilenzio – ‘selling silence – a company from Örebro worked with Note Design Studio in Stockholm to produce Focus acoustic screens. Why do so many Swedish companies choose Italian-sounding names for their companies?

In common with several other international companies, Herman Miller participated in the show with their local distributor – Ergonomic Office. They showed the updated version of the Aeron chair – Aeron Remastered – and the Keyn Chair Group.

Materia are from Tranås in Swenen and showed some innovative pieces from leading designers Roger Duverell, Ola Giertz, Anders Berg Steinar Hindenes, Petter Knudsen and others.

The largest company in the region, and indeed in Europe, Kinnarps, had an award-winning stand on two levels which matched their size. They had abandoned their traditional blue for a multihued rainbow presentation.

Another regional giant, Scandinavian Business Seating or SBS, is a group of acronyms – RH, RBM, the newly acquired BMA from the Netherlands and Håg. With nearly 550 employees, their large stand which attracted plenty of attention was more about presenting the corporate image than products.
SBS

One of the most beautiful products at the show was a very simple, endless, oak table – the Trestle – designed by John Pawson for Viccarbe from Valencia with a bevelled edge which just had to be touched. So elegant.

The fascinatingly named Into the Nordic Silence from Helsinki had some well thought out acoustic enclosures for different applications and were probably the leading company in this sector.

One of the most eye-catching displays was that of Byarums Bruk, founded 70 years’ ago in southern Sweden which makes outdoor public space furniture from cast iron. The stand featured a real locomotive, track and part of what was made to look like an old railway station. How a company with just fifteen employees could afford a stand like theirs, I cannot imagine.

Wherever in the world exhibitions are held, English is frequently the language of choice for company and product names, and marketing displays. Only in this region is the standard of English spelling and grammar impeccable, spoiling any opportunity to include amusing errors in reviews such as this.
The Stockholm Furniture Fair is probably the best in the world for a consistently high standard of design, manufacturing quality and presentation.

Every stand seems to have something worthwhile, and the senses are almost overwhelmed with beautiful products. Other office and contract furniture exhibitions take note; this is how it should be done. 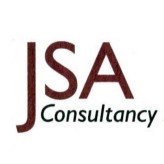 A business consultancy, based in London, England, John Sacks' JSA Consultancy Services provides expert, in-depth, information advice and guidance as to how to exploit successfully the office furniture and interiors markets in Europe, North America, Australasia and Japan. John Sacks is also Chairman of the Economic Committee of the FEMB